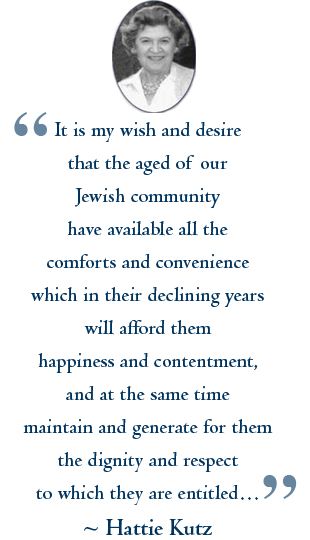 Kutz Senior Living Campus traces its roots back to 1902, when the Ladies Bichor Cholem Society was established to visit Wilmington’s sick and elderly. Recognizing the need for a facility to serve as a base for their caregiving, the Society changed their charter to enable the acquisition of the property. In 1920, they merged with a similar organization, The Ladies Moshev Zekenim, and purchased a former hospital at 211 West Street in Wilmington. In 1942, they moved to larger quarters on Washington Street.

During the 1950’s, the Jewish Federation of Delaware acquired the Sellers Estate in Bellefonte and began planning for a nursing facility. On September 14, 1960, the new Milton and Hattie Kutz Home, a 40-bed facility, opened at its current location on River Road. The needs of the community continued to grow, leading to an expansion in 1970 when 42 beds were added.

In 1997, a major renovation and expansion project was completed increasing the Home’s capacity to its present 90 beds, while also adding two new wings, an activities mall, and a visitor’s center.

In 2003 the kitchen, laundry, and loading dock were renovated and expanded, including the installation of a freight elevator.

Seeing the need to offer a continuum of care, Lodge Lane Assisted Living & Memory Care opened in 2013.  Situated just behind Kutz Home, the 11 acres of land were able to be shared between the two buildings, offering walking paths and an increased area of welcoming outdoor living space.

In 2017, The Kutz Home began an expansion of the rehabilitation gym to allow for updated therapy equipment in order to better service the population in need of rehabilitative therapies.  With the gym remodel underway, it was just as important to acknowledge the advancements made to the therapy and nursing departments.  Therefore, it was determined that The Milton & Hattie Kutz Home would reestablish its name to Kutz Rehabilitation & Nursing.

Despite the renovations and new developments on the property, the two facilities continued to experience an apparent division in the operations and pursued to unify as one organization.  It was 2018 when the umbrella name, Kutz Senior Living Campus was established along with a new logo and a resurgence of the Community.

The 1902 vision of the Ladies Bichor Cholem Society still resonates today as we continue to care for our aging and elderly with the reverence they deserve.